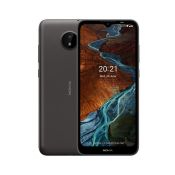 Model
Color
Quantity
Inventory 18
TospinoMall Commitment TospinoMall guarantees the security of your transaction: we will only allocate funds to the seller after the buyer confirms the receipt of the goods!
Special recommendation
TospinoMall Ghana
Enter Store
Favorite Stores
Hot Picks of the Store

Nokia C10 is a pocket-friendly smart choice flaunting a Nordic design out of the box. Users also get their hands-on standard camera options on both sides equipped with LED Flash. Thus enabling them to capture decent portraits irrespective of the lighting conditions. Processor-wise, the Nokia device faces stiff competition and its self-weight is on the bulky side as well. An Android version Go edition operating system might save the deal out of all.

A smart entertainer within budget

Display and Camera
Nokia C10 comes with a 6.5-inch bezel-less display that features a waterdrop notch alongside an aspect ratio of 20:9. The IPS LCD of the smartphone also generates a screen resolution of 720 x 1600 pixels while carrying a pixel density of 270ppi.
A 5MP Primary Camera gets installed at the backside of the smartphone with LED Flash and Digital zoom. Nokia has incorporated a 5MP Selfie Camera on the front, with LED Flash.

Buyer Comments
5.0
No comments yet
Report